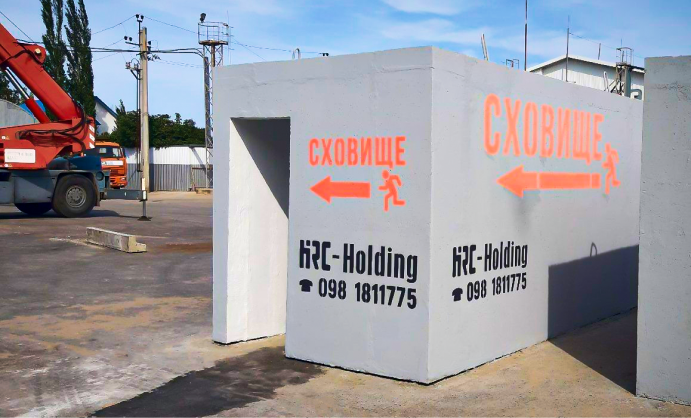 HI-RAISE CONSTRUCTIONS HOLDING LLC was the first in Odessa to start producing concrete shelters to protect the population in this difficult time. For them, the company uses high-quality concrete produced by the company itself - with double reinforcement of walls and ceilings. At present, the company has already delivered the shelters to a number of regions of Ukraine. At the moment, negotiations are underway with the Odessa mayor's office on the possibility to purchase and install our shelters in public places near parks, shops, public transport stops. The production capacities of the enterprise make it possible to provide the city with reliable means of civil protection in the shortest possible time.

Civil shelters have the following characteristics:

A feature of our shelters is that it is completely monolithic, quickly assembled and, if necessary, it can be easily moved to another location.

These shelters have one entrance and are designed for temporary stay of up to 15 people. These structures are able to protect the population during an air raid, as well as from small arms, rocket and whiz-bang shrapnels.

The idea to ​​create such shelters was to protect people who are now defending our right to a free life with weapons in their hands. By the way, such shelters were made and handed over to our military men. However, subsequently, the threat of air raids prompted us to another important mission – to ensure the safety of the civilian population.

The production of one such shelter takes about 5 days. The company's goal was to find such production formula that people hiding during an air raid could feel safe.

The HI-RAISE CONSTRUCTIONS HOLDING LLC is working to ensure that such shelters appear on the territory of the city in the near future, thereby ensuring protection for all residents and guests of the city!

If you have a question or need a consultation, our staff will help you.